Since ancient times Handicraft was the art that caracterized peoples.Gold was the main source of wealth a people could have.

We can’t forget the nasty end the peoples of the North-East area of Southern America and of part of Central America came to, at the the Spaniards’ hand. The only reason for the slaughter was the greed for wealth.

With the excuse of converting to Christianity “barbarian and idolatrous” peoples. Down here we quote an anonimous writing,  (Apu Inca Atahulpaman):

Enriched with the ransom gold the Spaniards
their horrible heart devoured by power
clashing one another
with ever darkening jitters, wild beasts.
They have shared out
the crystal clear glittering golden throne and your cradle
and the gold vases.
All of them. 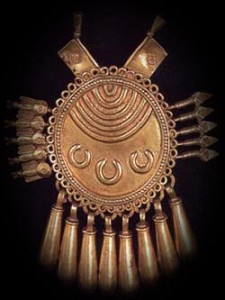 For the more ancient peoples, gold and silver – extracted tiringly from either mines or river sands – had an even greater value because they were rare. That’s why they were owned exclusively by the upper classes. In ancient times already, Egyptians, Romans and the Hellenic peoples would use goldsmiths who could make those objects which were the very symbol of nobility and wealth. For what concerns the modern times there’s something we’d like to stress. The artistic and cultural heritage is one of the main sources of our country. The handicraft work is therefore necessary because it carries on values handed down through different generations.That’s why the jewel can never be a trivial thing.